“There isn’t one specific incident that led to surgery. My injury was the result of cumulative events, like years of playing football, falling off a mountain bike, and skiing in the winter.”

But what led to Brad finally needing surgery?

“The shoulder pain wasn’t getting any better, and I was having difficulty throwing the ball with our dogs.”

“What initially appealed to me about the platform is the convenience,” said Brad. “I could work on my rehab on my own schedule and access it anywhere. Additionally, we already own a fair amount of exercise equipment like yoga mats, stretch bands, an exercise ball and a treadmill, so I knew I’d be able to use what I have for my exercise sessions.”

According to Dr. Solomon, other patients have raved about the home rehab program. Cost and convenience were the primary reasons they chose to try RecoveryOne. The doctor also liked the platform’s ability to send him updates of Brad’s rehab progress.

“I’ve had several appointments with Dr. Solomon and he would review my self-evaluation results,” noted Brad. “He’d often say I’m ahead of schedule and recuperating very well.”

“I would work on my rehab exercises every day, and you just can’t do that with conventional therapy,” he exclaimed. “I believe that not missing a single exercise session is a reason why I’ve progressed so quickly.”

Brad’s wife became a fan of the RecoveryOne platform when she saw that Brad could access the sessions on his cell phone while they were on vacation in Switzerland. Brad feels that he’s now able to do the same activities he used to do before surgery—including throwing the ball with his dogs. 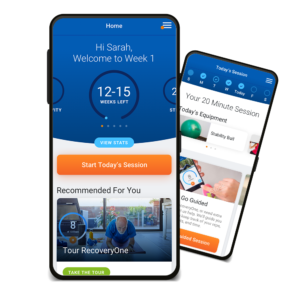 See how RecoveryOne can help your members or employees today.